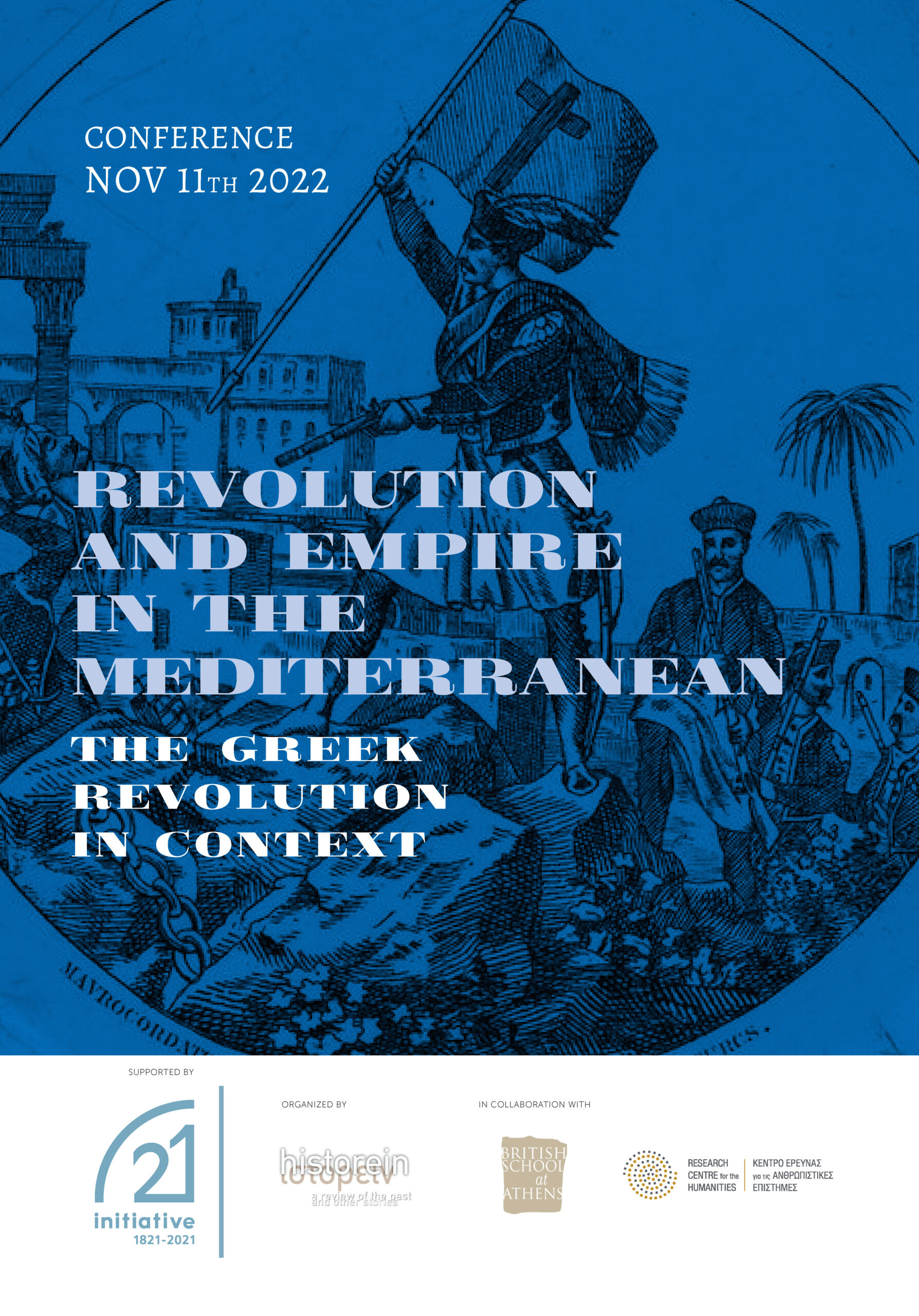 Attendance in person is limited and upon invitation by the organizers.

Attendance for the public only via Zoom. Please register by contacting abozika@rchumanities.gr

The Greek Revolution of 1821 took place in a moment of reaction and restoration that came after the first revolutionary wave of the Age of Revolutions and the Napoleonic wars. Be that as it may, the revolution became a reference, if not a model for other movements around the world, changed the geopolitical map of the Eastern Mediterranean, caused a rethinking of international affairs, and had a profound impact on the Ottoman state. Like all revolutions of the revolutionary age, it had manifold currents and contradictions, bringing together diverse social and cultural groups. Like some successful revolutions, it resulted in the secession of some provinces from an Empire and the creation of a new state. An understanding, thus of the outbreak and course of the revolution (as well as its “success”—a problematic term in itself) has to consider this larger context. Historians have for sometime now shown that this larger context was by and large defined by a ‘World crisis’, that was shaped to a large extent by empires. Hence the recent renewed focus on these latter, and the transnational (and in fact, inter-imperial) movement of people, ideas, and goods as the context for understanding the transformations of the Age.

We want to take this opportunity and discuss the Greek Revolution by situating it in this larger context. That it is appropriate to do is evidenced by the state of the Greek world at the conjuncture of the late eighteenth-early nineteenth century. Indeed, during this time Greeks inhabited empires (Ottoman, Russian, Austrian, Venetian, French, British) which afforded them enormous mobility and opportunity, while at the same time imposing (more familiar) limits. By the time of the 1820s—a period of imperial crises and of the first cracks of the Vienna system—the Greek world was at its most expansive. In seeking to think about this larger context and the Greek Revolution, the workshop will give special attention to the Mediterranean and the many imperial contexts in which this was a part. At the same time, and while discussing the Greek Revolution as a Mediterranean event, it will also interrogate into the particular character of the revolutionary wave of the 1820s.

Some of the papers do so by focusing on the interconnections and the shared features of the revolutionary developments taking place in the Mediterranean during the time (complex and region-wide events that included elections, constitutional and financial reforms, state-building, border-making, population politics etc.). Others focus more on the dynamic relationships such developments had with how people thought about the new political and social conditions in the region, and the political projects (national, imperial etc.) that they put into effect (or, sought to do so). Most papers show that the Greek revolution had an important role in debates about empire, revolution, statehood, and the international order that took place with particular force during this time. They also show that these debates were framed by an interplay between imperial visions—with the emphasis here being on those of Britain and Russia—and national and colonial projects.

Thus, the workshop has four aims: i) to reflect on the validity of using the largely ignored geography of the Mediterranean for understanding this period, ii) to revise our understanding of the Age of Revolutions, conventionally centered on the North Atlantic and France, and in this way to rethink the role of empires (not least of the Ottoman) and the Mediterranean in the coming of political modernity, iii) to reassess the 1820s as a foundational moment for the transition from a world of empires to a world of nation-states, iv) to expand the geographic/spatial scope of the Greek Revolution and thus go beyond the West-European perspective in which the Greek revolution has been conventionally examined.

Presentation of the 1821 Digital Archive Project

11:00 – 12.30 Panel 1: The Greek Revolution and the Mediterranean: Connections, resonances and cultural geographies

A Petitionary Moment? Communitarian and Individual Rights during the 1820s Revolutions in Greece, Portugal Spain and Naples

The long gowns of female slavery: between confinement and the revolutionary world outside

Liberalism and Revolution: British responses to Greece and the Mediterranean in the 1820s

Greece as Laboratory: Population Politics, Sovereignty, and Border-Making in the Eastern Mediterranean, c.1821-1867

Being a Moreot: Kocabaşıs between Morea and Constantinople before the Revolution

Respatialisation in the Eastern Mediterranean: Cyprus and the Ottoman age of revolutions

17:15 – 18:45 Panel 4: Imperial and colonial visions of the Mediterranean and the Greek Revolution

The Greek Revolution as an Imperial Event

Ada Dialla, Professor of European History, Athens School of Fine Arts; President of the Board of the Research Centre for the Humanities; HISTOREIN

What is a revolution in the Age of Revolutions? The Greek case of 1821

The Declaration of Greek Independence in a Global context