The proposed study aims to examine the exceptional conditions at the Greek-Turkish borders during February-March 2020, which led to the criminalisation and imprisonment of a considerable number of refugees who entered Greece irregularly. The research project will be conducted in the following manner: first, casefiles related to the period of concern will be studied, aiming to explore the penal and administrative treatment of the refugees that were instrumentalised by both countries. It will then continue with interviews from individuals and families who were subjected to prosecution, conviction and (possible) imprisonment, in order to record and assess their experience of institutional victimisation and objectification. The findings of the research will be analysed through the lens of border criminology, with the ultimate goal of contributing to a criminological comprehension of the Greek border penality in times of crisis. 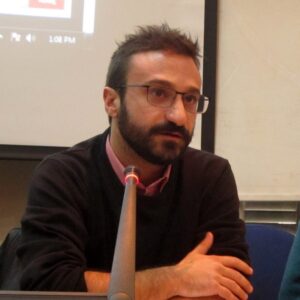 Dimitris Koros studied Law at the Aristotle University of Thessaloniki and gained his MA in Crime, Law and Society from the University of Manchester. In 2016 he completed his PhD thesis in penitentiary policy (title: “Systems and mechanisms of discipline in the Greek prison system: Issues and perspectives”) at the Department of Social Administration and Political Science (Democritus University of Thrace). He is the author of “Discipline and its Limits in the Greek Prison System” (Nissos publishing, 2021) and the editor of Michel Foucault’s “Prison/Governmentality. Two Texts” (translation and post-face, Akivernites Politeies, 2017). He has published articles in Greek and foreign collective volumes and scientific journals. He is a scientific associate at the Law School at the Democritus University of Thrace (participating in the teaching of Criminology, Criminal Investigation, Corrections and Juvenile Law), a tutor counselor for the Hellenic Open University (teaching crime policy) and a post-doctoral researcher. He practices law at the collective law office “Partners Lawyers” and has been working as a lawyer for the Greek Council for Refugees, providing free legal aid in all areas of refugee law and mainly in the field of administrative detention and illegal border practices since 2013.