In industrialized societies, criminology determines who counts as deviant and has developed classification systems and other tools for assessing an individual’s degree of social conformation. Deviance in its conventional sense is the outcome of a complex juridical-bureaucratic process; moreover, crime mapping and policing are established in relation to norms both of social functioning and labor market participation. How exactly this is done is rarely apparent to the subjects of assessment. A research attempt to study the ways that statistical elements are received by the police in the metropolitan field and the way they are assessed and either presented or concealed, would necessarily look at the very fields in which the police acts. It would also carefully study the particular method of police operations in their materiality and the ways in which the theoretical-conceptual context that explains and methodically prepares them has been applied. Forms that, through repetition, self-confirm and self-improve. Police science constitutes performatively a basic repertory of action and the prerequisites for the self-perception itself as an epistemological example.
Accordingly , although there is noted a fascination with the “sciencing of crime” – as represented by developments in forensic technologies, biotechnologies, computer simulations and virtual reality- and it is promoted as a radical way of thinking about the problem of crime in society, the very notion is based on “hard science”. Actually, there is little new or radical here. What I suggest is the need for a criminology of hybrids focusing on the mapping of techno-social networks, their actants and assemblages that demand precisely the dissolution of binary oppositions and, more particularly, of the human/technical splitting in the apprehension of the phenomenon of crime.
So, are policing and repression technologies and forensic science just another technological package by which work is accomplished? What do the ANT lens have to offer in examining theoretically and empirically these technologies?
The main purpose of our research is the practicalities of valuation, assessment, governance and accountability in digital environments, broadly based on science and technology studies, geography and public policy. ‘Big data’, ‘data mining’, ‘crime analysis’, ‘geographic profiling’, ‘data visualization’, ‘crime mapping’, ‘predictive analytics’: the significance of these techniques lies in the way they frame technology. They present technology itself as neutral and unproblematic. At the same time we are interested in history and historiography of Hellenic Police (Gendarmerie and Urban Police): the everyday life, culture and practice of policemen, the institutional structure through STS prism, the relocation of materialities’ significance, the assemblages of technology and actants in practice etc. 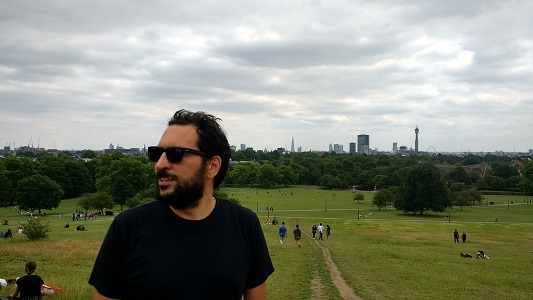 Antonis Vradis is a geographer with an urban focus, a migration inclination and a political urge to make sense of our strange times. He is the Principal Investigator in three current/recent major research grants: NutriCities (British Academy); Transcapes (ESRC/DFID) and Police Science (RCH). He is also Co-Investigator in PUrSI (ESRC Urban Transformations), Associate Editor at Political Geography and Senior Editor at CITY.

Giorgos Mattes is a PhD candidate in the Department of History and Philosophy of Science at the National and Kapodistrian University of Athens. His dissertation aims at studying the database technologies for police purposes, the practices of categorization in analogue and digital environments and the relations between these practices and the ones practiced in law enforcement. The scope of the research is to identify the importance of materialities and to connect technology and actors in action through the lens of Science and Technology Studies (STS). He has conducted an empirical study in Sweden and Athens and results of these surveys have been presented at international conferences. He lives and works in the center of Athens.