The research examines the ritual of Ashura, as it is performed by the Pakistani Shia community in Piraeus. Ashura is the day of mourning for the martyrdom of Imam Husayn: the Prophet’s grandson and 3rd Imam who led a revolt against the Omayyad caliph Yazid A, and was finally beheaded in the battle of Karbala in 680 AD. This battle provides the central narrative around which Shia Muslims construct their political identity as migrants and their religious identification as a minority vis-à-vis Sunni Muslims in Greece. Ashura is commemorated every year through rituals of lamentation and public processions that include, in some cases, self-flagellation.

A decontextualized focus on the act of self-flagellation, over-accentuated by the mass media, reinforces local stereotypes of the Shia community practices as ‘incompatible’ with Greek cultural values. Social representations of the Shiite as ‘barbaric Others’ are frequently evoked in public debate in order to support Islamophobic and racialised narratives of anti-cosmopolitanism. However, confronted with xenophobia and social estrangement, the Shiite systematically attempt to articulate counter-narratives of ‘cultural intimacy’ (Herzfeld 2005) that stress the similarities between their ritual lament and various embodied performances of faith from the Greek cultural context, such as the Tinos pilgrimage (Dubisch 1996) or the Anastenaria (Danforth 1989).

The proposed research has a threefold purpose. First, it documents the community’s political struggle to promote discursively and practically a multicultural vision of citizenship based on embodied and affective components of subjectivity. Second, it unravels the rich meta-symbolic character the Ashura assumes in a migratory context, becoming an idiom or expressing and negotiating feelings of loss associated with migration trajectories. Third, departing from the case of the Ashura, but also opening-up the research focus through other examples of performances of lament, it examines how the claim to cultural intimacy is re-articulated in contemporary artistic practices, focusing on the performing arts. 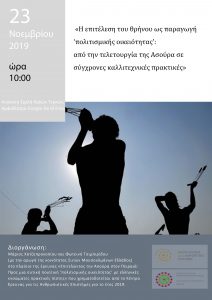 “The performance of lament as production of ‘cultural intimacy’: from the ritual of Ashura to contemporary artistic practices”.

The research project “Performing Ashura in Piraeus: Towards a Shiite poetics of ‘cultural intimacy’ with Greek embodied practices of religiosity” was funded by RCH for the year 2019.

10:15-11:30 1st panel [language: Greek] The performance of lament as production of ‘cultural intimacy’: from Ashura to Anastenaria.
Moderator: Foteini Tsibiridou

Mourning and lament as practices of religious faith in the Eastern Mediterranean: from popular beliefs to the practice of cultural intimacy

Turing the immaterial and invisible of the myths to the visible and apocalyptic of the present: gendered asymmetries in rituals of lamentation

Between the politics of difference and the poetics of ‘cultural intimacy’: performing Ashura in Piraeus

Ashura and Shiite visibility in the city of Athens: a perspective ‘from within’

Ritual and Reenactment: Performance as vehicle for Research and anthropology as medium for social acknowledgment

‘Āshūrā’; or, Torturous Memory as a Condition of Possibility of an Unconditional Promise

Tackling mourning at the performative space: rituals of lament as a stage function 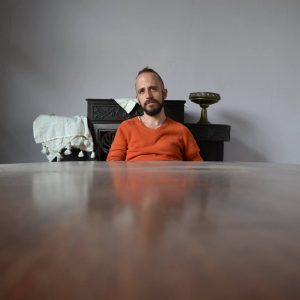 Marios Chatziprokopiou studied history and theatre in Thessaloniki and visual arts in Paris. He earned his M.A. in social anthropology (Ecole des Hautes Etudes en Sciences Sociales de Paris), funded by the French government and the Michelis Foundation, and his PhD in theatre and performance Studies (Aberystwyth University), funded by the Doctoral Career Development Scholarship. He teaches contemporary theories of theatre and drama at the University of Patras (2018-9, first semester) and he has taught courses of anthropology, theatre and performance at the Federal University of Bahia, Aberystwyth University, and Panteion University. His articles appear in international edited volumes and peer-reviewed journals. His research and teaching interests focus on performances of migration and refugeeness, contemporary re-readings of ancient drama, performances of gender and sexuality, ritual performances of lament (emphasizing on Shia Islam), and on the interrelations between religious ritual and artistic practice. 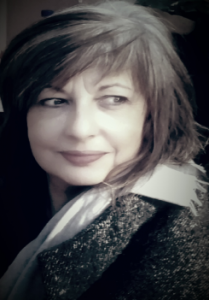