The architecture of everyday life, the lived space, issues of gender, housing, and habitation were the main concerns and research interests in the personal, professional, and academic career of Annie Vrychea (1944-2005), professor of the NTUA School of Architecture. Starting from the defense of the right to the city, her research and realized work focused on the participation of users in the production of everyday-life spaces, in an effort to eliminate spatial exclusions and social discriminations.

Her innovative participatory design proposal for the regeneration of the refugee settlement of Thebes, her contribution to the Habitat IV conference, her multilayered research on gender issues, her struggles for rescuing the refugees housing units on Alexandra Avenue, among others, laid down new foundations, expanding the boundaries of architectural theory and practice.

How could we relate the approach of Annie Vrychea, the importance she gave to the places and times of daily life, and to gender issues to the current situation? By unraveling the thread of the professional and research activity of Vrychea, the proposed research aims to emphasize the sensitivity with which she approached the architecture of everyday life and the spacetime of everyday people. “In the generalized crisis of values, ideas and ideologies, […] where is architecture? That is, poetry in our daily lives, in our city, in our cities, in our neighborhood? ” (Vrychea 1993) Starting with that question of Vrychea herself, which remains relevant, one target of this research is to study how her approach to the architecture of everyday life can contribute to the discussion of contemporary urban issues. An equally important objective is to focus on Vrychea’s gender perspective in the habitation of everyday-life spaces, while highlighting the often underestimated and overlooked female presence in architectural and urban research and practice.

Initially, the research group will study the primary sources from the archive of professor A. Vrychea, located in Department III (Architectural Language, Communication and Design) of the School of Architecture of the NTUA, to fill a significant gap that currently exists in understanding the importance of the architecture of everyday life. With the aim of bringing to light her theoretical and implemented work, the classification, digitalization, and study of the archives will result in the making of a catalog that can assist a future creation of a digital online archive, open and accessible to researchers, students, and teaching staff, ultimately expanding educational possibilities, easing access to hidden- and knowledge. 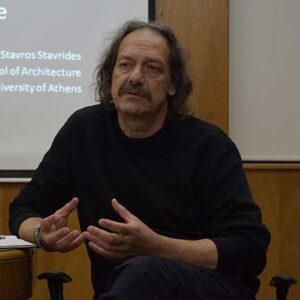 Dr. Stavros Stavrides, architect and activist, is Professor of Architectural Design and Theory at the School of Architecture, National Technical University of Athens Greece, where he teaches graduate courses on housing design (including social housing), as well as a postgraduate course on the meaning of metropolitan experience. He has published numerous articles on spatial theory. His books: The Symbolic Relation to Space (1990), Advertising and the Meaning of Space (1996), The Texture of Things (with E. Cotsou, 1996) From the City-Screen to the City-Stage (2002, National Book Award), Suspended Spaces of Alterity (2010), Towards the City of Thresholds (in English, 2010 and 2019, in Spanish and Turkish 2016), Common Space (in English, 2016, in Greek 2018, in Turkish 2018) and Common Spaces of Urban Emancipation (in English 2019). His research is currently focused on forms of emancipating spatial practices and spaces of commoning. 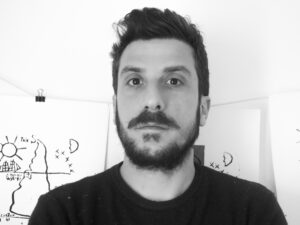 Sergios Striglogiannis is an architect, graduated from the Universität Stuttgart, he obtained a postgraduate degree from KU Leuven (M.Sc. in Human Settlements), and he is currently a Ph.D. candidate at the National Technical University of Athens, Sector 3 – “Architectural Language, Communication and Design”. His research interests focus on urban commons, participation, and the re-appropriation practices of urban space, with an emphasis on urban art. As a Ph.D. candidate, he has been a teaching assistant at various undergraduate classes of the School of Architecture of the N.T.U.A. and has participated in international conferences and workshops. 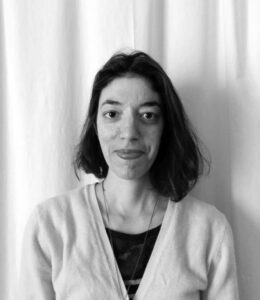 Ernestina Karistineu Efthimiatu was born in Athens and grew up on Naxos. She studied architecture (Department of Architecture-University of Patras, 2012), and currently is a Ph.D. candidate at the National Technical University of Athens, School of Architecture (Department III Architectural Language,  Communication and Design), on the subject of “Photographic Representations of exile: body and space”. Her research explores the ways in which photographic documents construct the image of the exile space in the context of formal and informal photographic archives, focusing on Greek exile islands Trikeri and Yaros.

She holds a MA degree in “Architectural Design – Space – Culture” from the National Technical University of Athens. She has worked as a freelance architect,  as a children’s educator on architectural heritage and has been a teaching assistant in the School of Architecture. Her research interests include areas where the theory of habitation of space and habitation of image meet, space in the context of “state of exception” and archival research.