From mid 19th century the issue of foudlings, destitute and orphan children in the Ottoman Empire is being attributed an immense importance both centrally (by the ottoman state) and on a communal basis. Two basic reasons lead to the creation of a, progressively in time, more and more sophisticated surveillance system of this population group: the govermentality of the reformed bureacracy of modernizing ottoman state and the need to keep together and develop the national bounds and feelings of the people of various ethnoreligious groups in the age of nationalisms. During the period of First World War and the Greek-Turkish War of 1919-1922, the question of demographic data for rival and hostile nationalisms is crucial and clearly reflects on the issue of refugee children. Literally, one can anticipate a battle going on concerning  the belonging of these children, who are eloquenlty characterised “little nation martyrs” (εθνομάρτυρες) by the Greek orthodox press of the time. Demographic engineering of antagonistic nationalisms in the a period of total war, i.e. the First World War, will serve as the main theoretical framework of my research.

Moreover, I will address the relation of war to childhood, including thus the topic of ottoman refugee children of the First World War in the international historiographic paradigm. Lastly but very importantly, by reading through the lines of the archival material, I will shed light to the lives and personal strategies of the refugee children themselves. By doing so, I will stand critical at the dominant discourse of the period, that presented these children as mere victims of the circumstances. By decomposing their mediated voices, I will approach them as acting individuals with personal agentas, that might differ from the imposed rule.

The topic of war refugee children and the rivalry between the Ottoman state and the Greek Orthodox community is an unexplored research field, which will shed light from a new perspective to the history of national rivalry during the First World War as well as to the historiography of the Greek Orthodox community of the Empire. Finally, it directly relates to the birth of notions, legal status and practices such as humanitarian aid, refugee, unaccompanied-orphan/parentless children that are unfortunately important current problems. 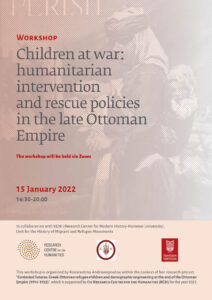 Children at war: humanitarian intervention and rescue policies in the late Ottoman Empire

This workshop is organized by Konstantina Andrianopoulou within the context of her research project “Contested futures: Greek-Ottoman refugee children and demographic engineering at the end of the Ottoman Empire (1914-1922)”, which is supported by the Research Centre for the Humanities (RCH) for the year 2021.

In collaboration with KENI (Research Centre for Modern History-Panteion University), Unit for the History of Migrant and Refugee Movements.

The workshop will be held via Zoom:

Kill the Armenian/Indian; Save the Turk/Man: Thoughts at the Intersections of Humanitarianism, the Transfer of Children and the Possibilities of a Comparative History of Indigenous Genocide

Research: “Contested futures: Greek-Ottoman refugee children and demographic engineering at the end of the Ottoman Empire (1914-1922)”

The research project “Contested futures: Greek-Ottoman refugee children and demographic engineering at the end of the Ottoman Empire (1914-1922)” was funded by the Research Centre for the Humanities (RCH) for the year 2021.

Violent persecussions against the Christians in the Ottoman Empire during the First World War uncovered another aspect aof the total war: the state staged a war against its own citizens in order to get rid of its non muslim population and thus achieve ethnic homogeneity. In other words, the Ottoman State adopted violent methods to reshape the    demographic profile of the country, to engineer new demographic data.

My research dealt with the impact that deportations and war conflicts had on Greek orthodox children in the Ottoman Empire during the First World War. Precisely, it focused on refugee children hosted in various Greek orthodox institutions and on young girls found in Turkish homes and institutions in Istanbul during the town’s allied occupation; the latter were claimed back by the Greek State and the communal leaders. Contrary to the Armenian case, thoroughly researched, the case of Greek orthodox refugee children in the Ottoman Empire remains understudied.

Thus, my research centered in firstly on the policies adopted by the Greek orthodox community of Istanbul and the Greek state regarding the refugee children (most of whom were orphaned by father or by both parents); the main ideological axes of these policies were the demographic empowerment of the national community and the protection/formation of its members’ national characteristics. Secondly, on the presence and functioning of the Greek state’s high commission in town as the prevailing national authority of the Greek orthodox population. Thirdly, on the limits and the contradictions of the international humanitarian intervention regarding children.

Lastly, my research addresses the highly important issue –in my opinion- of children’s agency; that is to say, through the examination of detailed data on children –mostly girls- found in Turkish homes and institutions, I was able to shed light on personal strategies of surviving war misfortunes.Methodologically, I tried to reconstruct personal stories that unfold different aspects of the war impact on the people who experienced it. 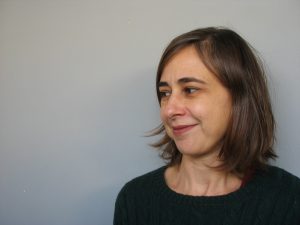 Konstantina Andrianopoulou studied Ηistory and Αrchaeology at the School of Philosophy of National and Kapodistrian University of Athens (1994-1999) and holds an MA in history, History Department, University of Bosphorus (Boğaziçi Universitesi), Istanbul (2004). She holds a PhD in history (2014), Panteion University, Department of History and Political Sciences, Athens (Dissertation theme: The Greek Orthodox Community of Istanbul during the interwar period: Communal organization, ideology and the limits of the minority in the Turkish national setting). In July 2020 she enrolled for a post-doc (Panteion University, Department of History and Political Sciences, under the supervision of assistant professor Andreas Lyberatos) on the orphan refugee Greek-orthodox children in the Ottoman Empire (with focus on Istanbul) during the First World War until 1922. Currently, she holds a post-doc researcher position in InterMusiG research program at the Laboratory of Ethnomusicology and Cultural Anthropology, National and Kapodistrian Univeristy of Athens. She has participated in the following research programs: “Migration of Greek-Orthodox from the Ottoman Empire to the United States of America, late 19th century-First World War” [scientific supervision: S. Anagnostopoulou. Pithagoras II-Support to research groups of Panteion University] and “Gender and Inter-religious relations in South Eastern Europe and the Eastern Mediterranean (19th-20th centuries)» [École Française d’Athènes- Faculty of Turkish Studies and Modern Asian Studies, University of Athens. Coordinators: Tassos Anastassiadis and Efi Kanner].

Since 2009 she teaches history and literature at Moraitis senior high and high school of Athens and coordinates history teaching at senior high school. She has attended and participated in various educational programs on the teaching of history in the secondary education.