The aim of this proposal is to examine how do the non-Muslim minorities in Turkey, develop new ways to protect and enjoy their minority rights since 2013 in a politically atmosphere polarized between the incumbent and opposition parts and now reflected to the electoral alliances.

Considering the increasing political polarization in Turkey since 2013 mainly constructed on identities due to the several political and social events such as Gezi Events, terrorist bombings, presidential elections and military uprising, this research focuses on the political behavior of the non-Muslim minorities in Turkey to understand how they develop creative solutions in protecting their collective and individual rights. How do the minority communities perceive the increasing political polarization which targets them ‘the other’ twice and limits their room for political participation to express their rights and demands?

The fact that there are minority deputies with different party tickets in the Turkish parliament since 2015 makes this research crucial to explore the political behavior and preferences of the minority groups through face-to-face interviews with each communities’ prominent actors (politicians, journalists, academics) and surveys with the group members to acknowledge whether they prefer to align with the pro-Islamist incumbent party; have a block vote for the secular parties which are more close to their life-style; or vote for the parties that nominate minority candidates.

Besides recording the effectiveness of the minority deputies in terms of their field-work in the Turkish assembly, interviews to be conducted with the minority deputies also aim to enlighten the discourse these communities adopted: demand for the collective rights of the minority groups or a struggle for general political and civic rights considering the whole society- especially the opposition. The proposed research will also measure the impact of Turkey’s recent bilateral tensions with the minority groups’ kin-states (namely Greece, Armenia and Israel) and president Erdoğan’s much debated policies such as reopening of Hagia Sophia and Chora museums as mosques in summer 2020 on these communities’ attitudes towards the Turkish state. 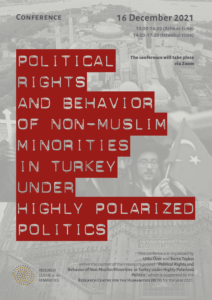 This conference is organized by Utku Özer and Burcu Taşkın within the context of their research project “Political Rights and Behavior of the Non-Muslim Minorities in Turkey under the High Polarized Politics”, which is supported by the Research Centre for the Humanities (RCH) for the year 2021.

“Dimensions of Polarization in Turkey”

“Between a Rock and a Hard Place: The Case of Turkey’s Greek Minority” 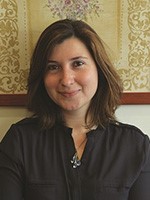 Her areas of interest are political representation of minorities, democratization, gender studies, voter behaviour, Turkish–Greek relations, and Balkan politics. She is the author of the book Political Representation of Minorities in Greece and Turkey: Nationalism, Reciprocity and Europeanization, released on March 2019 by Libra Publisher.  She has published several related articles at the journals such as Turkish Studies, Nationalism and Ethnic Politics, Open Gender Journal, Southeast European and Blacksea Studies, Regional and Federal Studies.

Born in Istanbul in 1982, Utku Özer graduated from Istanbul University with bachelor’s degree in International Relations. She had her masters’ degree in International Relations in 2006 at Marmara University with a dissertation on the dynamics of post-Soviet nation-building. She received her PhD in International Relations from Istanbul University in 2012 with a dissertation titled The Role of Nationalism in the Disintegration and the Reformation of the Empires: The Examples of Ottoman Empire and Russian Empire. She has worked as a research assistant at Maltepe University, Department of International Relations and European Union between 2009 and 2012 and then as an assistant professor at the same university between 2012 and 2015. She was later an assistant professor at Gaziantep University for a year until 2016, when she moved to Greece for her postdoctoral studies. She has taught courses on History of Political Thought,  Political Ideologies, Political Thought in Turkey, History of the Ottoman Empire, Turkish Foreign Policy, Humanities, Political History, Nationalism, and Balkans. Some of her areas of interest are nationalism, identity, history of the Ottoman Empire and modern Turkey, history of Russia, Turkish-Russian relations, Turkish-Greek relations,  and Balkan politics. She has several articles, book chapters and presentations in related topics.