This project considers the study of recent developments on artistic research in Greece as an occasion for an important theoretical and methodological contribution in this newly established field. It is timely in doing so, both given that artistic research, its history and prospects are of great interest internationally, and in view of the fact that, even though artistic research has become essential in cultural production of value worldwide, it is still not well documented as a social phenomenon and remains under-theorized, in need of specific case studies.

The term artistic research, referring to activities in the processes of art production that could qualify as “research,” is relatively recent but it has already been strongly debated. This project responds to the growing interest for artistic research, nowadays, related to current drifts in the arts, which may be understood as a confirmation of the artists’ innovative spirit that opens up new perspectives for scientists themselves or as a by-product of neoliberal antagonistic relationships in education that could restrict artistic freedom by creating a new academy.

The project focuses on the fact that since the 1990s artistic research has seen a significant development in Greece too, due to artistic initiatives drawing from social sciences and humanities in order to produce art with political overtones. This tendency has been reinforced during the current crisis when the need for art activism was clearly felt and encouraged by the international attention that contemporary Greek art production gained. Meanwhile, Greek Fine Arts Schools face the challenge of artistic research and of further updating their curriculums.

This project will provide a solid background for the study of artistic research culture within and around academia both in Greece and internationally and will deepen our understanding of art-making processes, their institutional context and the public perception of contemporary arts. A number of questions on creativity, interdisciplinarity, and collaboration in scientific and artistic research will be posed and their educational and political implications will be thoroughly considered. 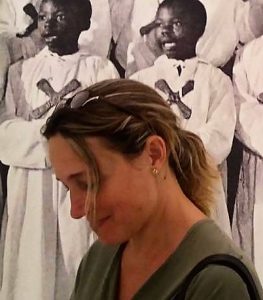 Elpida Rikou has studied sociology (Panteion University, Athens), anthropology (D.E.A., Université Paris V-Sorbonne), social psychology (D.E.A. and Ph.D, Ecole des Hautes Etudes en Sciences Sociales, Paris) and visual arts (Athens School of Fine Arts). She has taught Anthropology of Art in the Department of Theory and History of Art of the Athens School of Fine Arts from 2007 to 2017.From 2011 to 2013 she has also taught in the Postgraduate Program (Master in Fine Arts) of the Department of Visual Arts of the same School. She is the editor of the volume Anthropology and Contemporary Art (Alexandria, 2013) for  which she has also written the introduction, as well as of the translation in Greek of Marc Augé’s book Pour une anthropologie des mondes contemporains (Alexandria, 1999). She has co-edited the translation in Greek of Alfred Gell’s book Art and Agency (M.I.E.T., forthcoming), two volumes combining works of artists and social scientists on value (Αξία, nissos, 2018) and on sound and voice (Φωνές/Fones, nissos,2016), as well as the special issue of FIELD.A journal of socially engaged art criticism on research between art and anthropology (2018). She has published articles in scientific periodicals, edited collections, art catalogues and newspapers. She has conceived and coordinated several art projects with a transdisciplinary character in which she is also a participant as an anthropologist and visual artist, since 2010 (the art, research and education project TWIXTlab, with S.Grigoriadou and G.Samantas, the international research project “Learning from documenta” with E.Yalouri, etc.).

Katerina Konstantinou is an art historian and holds an MA in Exhibition Curating. She is currently a PhD candidate in the Department of Social Anthropology at Panteion University in Athens. Her research interests focus on the intersection of the fields of contemporary arts, anthropology and archaeology. She has participated in several research programs. She has worked for museums and cultural institutions in Greece and abroad. She has participated in conferences and she has published texts in collective volumes, exhibition catalogs and magazines. Lately, she has been closely collaborating with artists in various projects that involve research methods and practices into the art-making processes.