This project will examine the environmental history of the Philippoi Marshes -a wetland system located in Eastern Macedonia- and will focus on the land reclamation project that turned the marshes into arable land. The main goal of this project will be to highlight the social effects that this reclamation had on the national and economic integration of southern Macedonia into the Greek nation-state.

The Philippoi Marshes extended the southern part of the plain of Drama covering an area of 35m2. After southern Macedonia was ceded to Greece, the marshes often became the subject of complaints from state agronomists who had settled in the sent there by the Greek state to oversee and facilitate the intensification and modernization of the Macedonian agriculture. The first discourses regarding the reclamation of the marshes emerged immediately after the annexation of southern Macedonia. However, the lack of available capital on part of the Greek government as well as the precarious international diplomatic situation from 1913 to 1922 postponed any serious attempt to implement such a project. The attitude changed rapidly with the Treaty of Lausanne and the massive population exchange of 1923, after which it became clear the available arable land would not suffice to meet the settlement and sustenance needs of the Orthodox refugees of Asia Minor, many of whom ended up resettling in the province. Despite the pressing needs, the public works in the Philippoi Marshes took place only in the first years of the 1930s, as part of the agricultural modernization program of the Venizelos administration. The land-reclamation was carried out by the Monks-Ulen company, which was already known to the Greek government due to previous infrastructure projects that it had undertaken. When the works were finally completed, the dried-up marshes were made into arable land that was subsequently granted to Orthodox refugees as well as native Macedonians.

In this historical context, this project will not only consider the land reclamation of the Philippoi Marshes as a hydraulic engineering project but also as a process that included social engineering policies. This means this project will also explore the issue as a platform on which the concepts of economy, nationalism and modernization intertwined. Its ultimate goal will be to investigate whether this land reclamation could fit in the context of the resettlement/colonization policies that were implemented in southern Macedonia that aimed at securing the province and incorporate it as an integral part of the Greek state through an environmental project that consolidated the economic prevalence of refugees in the area. 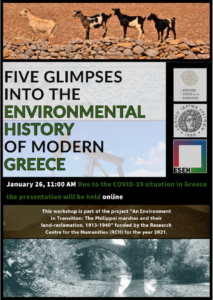 Workshop
Five Glimpses into the Environmental History of Modern Greece

Due to the epidemiological situation the workshop will be held online.

This workshop is part of the project ”An Environment in Transition: The Philippoi marshes and their land-reclamation, 1913-1940” funded by the Research Centre for the Humanities (RCH) for the year 2021.

11:00-11:20 Dimitris Glistras: “At the mercy of a miserable ditch named Kifisos”: The changing perceptions of the natural environment and the contest with nature through the history of Athens’ main river

The academic report for this research’s results is available in Greek. To view it, click here and browse to the tab “Αποτελέσματα Έρευνας”. 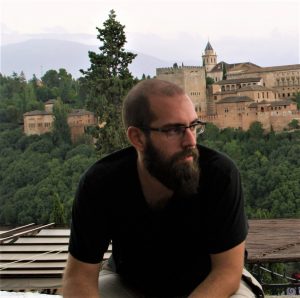 George L. Vlachos was born and raised in Athens. He received his first degree from the Department of Political Science and Public Administration from the NKUA in Athens. He then turned to history, receiving his master’s degree from the Department of History at Leiden University in the Netherlands (Political Culture and National Identities). In 2015 he started his doctorate at the European University Institute (EUI) in Florence having received a full scholarship from the State Scholarships Foundation. He earned his doctorate in 2019 when he successfully defended his doctoral thesis entitled “Where The Nation Would Dwell: The Hellenization of Southern Macedonia, 1913-19340”.

In 2019 he was elected regional representative of Greece in the European Society of Environmental History (ESEH) while since the beginning of 2020 he is an external research associate of the National Research Foundation (Institute of Historical Research). His research interests focus on the modern environmental history of Greece in relation to issues of nationalism, modernization and capitalist exploitation.